There are many ceremonies in Japan that are steeped in tradition, and weddings are one of them. What are the main things to know about them should you find yourself at a traditional   (shinzenkekkon), or Shinto wedding?

Many modern weddings in Japan have adopted a western style of marriage. There are many still influenced by classical culture. The more traditional Shinto ceremonies are based on the wedding of Emperor Taisho and Empress Teimei in 1900. There are several parts that make up a wedding ceremony. Traditions like  (shutsuba tsu),   (norito-sojo), の (sankon no gi), and more.

The Bride and Groom 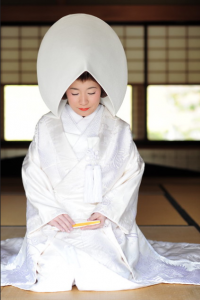 In Japan, the bride is called the  (hanayome). The dress of the wife-to-be is called a  (kimono), and in weddings there are two types that are used. First there are  (shiromuku), which are primarily white. These are used during the wedding ceremony to symbolize the pure innocence of the bride. This kimono is usually accompanied by a wig and し (tsunokakushi), a headdress which symbolizes the wife’s desire to become a good spouse. While white is the primary color, it does not have to be the only color present. There are often other colors included in the garment, red being the most common. 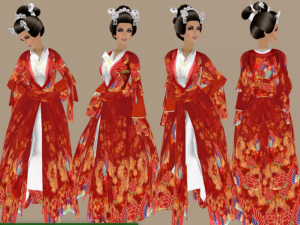 The second kimono is called an ちけ (uchikake). With red as the main color, this kimono is worn by the bride after the ceremony at the wedding reception. Due to personal preference, sometimes brides will only use one of these kimonos for both events. This garment is heavily brocaded, and sewed with thick hems designed to be trailed behind the bride on the floor. It is worn with white underneath the red in order to maintain the sense of the bride’s purity. 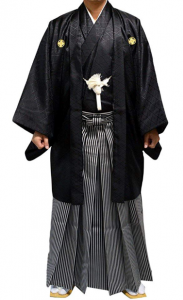 The groom’s outfit is called a  (montsuki haori hakama). The   (shinrō), or groom, wears this specific kimono which is inscribed with his family crest. It is tied together in the front with a  (haori himo), or haori cord. The pants of the outfit (hakama) are kept loose along with the rest to the kimono.

There are some contrasts between western marriage dress and Japanese marriage dress. One is in the form fitting nature of the clothing (or lack thereof). In the west, suits and dresses are custom tailored to form-fit the individual they are made for. In Japan, it can be said that to some extent the kimono wears you. Often times kimonos have a long history in the family, and even those which are newly made for a wedding follow this sentiment. They are worn by folding them over in a specific way, and use the person wearing them as a display stand. In the west the garment is made to enhance the beauty of the wearer. In Japan, the wearer mutually compliments the innate beauty of the garment. 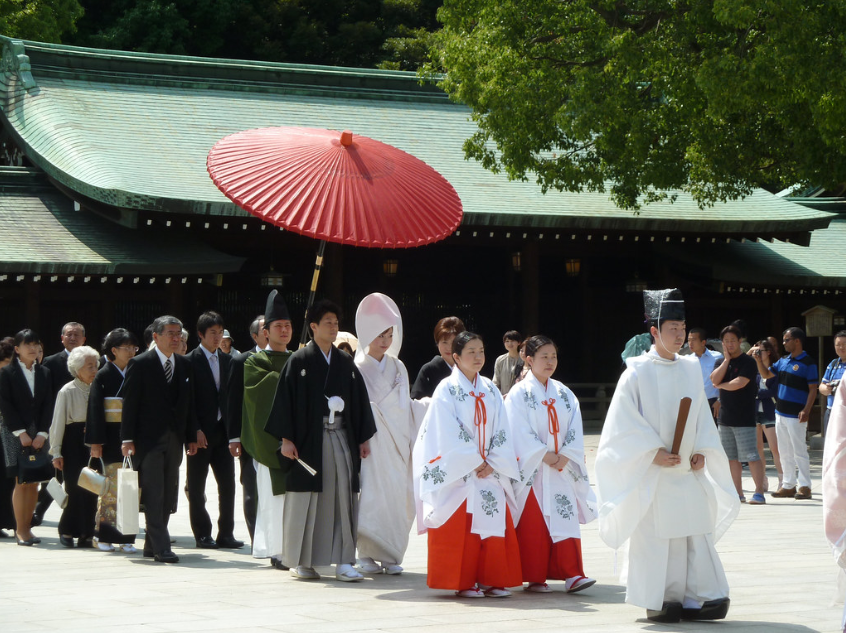 First comes the  (shutsuba tsu), or purification ritual. This ritual signifies the purifying of souls of the bride and groom, like the removal of guilt, bad luck, and uncleanliness. The priest uses a wooden wand with paper streamers called an  (Ōnusa) to cleanse the couple. 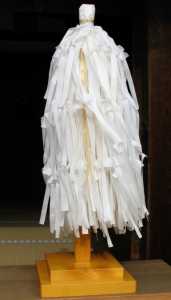 The next step is   (norito-sojo), a Shinto prayer that thanks the gods for the marriage and wishes for a happy life for the newly weds.

Then comes the の (sankon no gi), or the drinking of the sake. The bride and groom are presented with three different sizes of sake: small, medium, and large. The first two cups are not to be drank from, they raise them to their lips before handing them back. Only the third large cup is consumed. 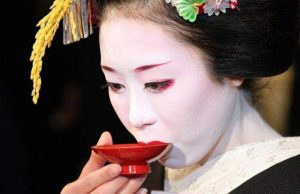 These are the three main traditions that you will find, but the ceremony can also include others. There is the passing of the comb from the wife to the husband that symbolizes her giving herself away to him. There is an exchange of rings and an offering of a sacred Tamagushi tree branch to the gods, which is followed by the two families drinking together.

There’s a long history of wedding traditions in Japan, and they’ve evolved over time. If you ever get the opportunity to attend one (or have one of your own) make sure you’re prepared!

For more on various Japanese traditions and guides to living in Japan, check out our blog at: https://www.cotoclub.com/blog/.