相撲 (sumou)  is a sport unique to Japan with a long history, beginning in the Heian period from 794 to 1192. The sport was created as entertainment for the imperial family. Sumo then persisted until it became the national sport of Japan.

The rules are simple. Win by knocking your opponent out of the ring or forcing them to touch the ground with any body part but the soles of their feet. One can lose by failing to show up for a match or performing an illegal move. There is even a rule that a wrestler is disqualified if their 回し (mawashi) or loincloth falls off. It is the role of tradition in such a simple concept is what makes the sport so unique and interesting.

Competitive sumo started in the Edo period, around the 16th century. Sumo wrestlers live and practice together. They share strict regimens and diets in line with tradition. Matches take place in the 土俵 (dohyo) and often only last a few seconds, with the longest topping out at a few minutes. The original goal was to throw one’s opponent before the concept of a ring was later established.

The sport has preserved many traditions from Shinto, such as salt purification. You see this at the beginning of the match when the wrestlers throw salt into the ring to ward off bad spirits. It is also common for wrestlers to drink sake before a match. This is part of a psych-up process done by the wrestlers to try and get themselves ready for the bout. It is also done to get into the head of their opponent.

At the top of the 番付 (banzuke) or ranking list sits the 横綱 (yokozuna), the grand champion. This is more of a class than a title, as there can be more than one yokozuna at a time. Promotions and demotions happen often, based on continued performance. In many other forms of fighting, wins are what determine a competitor’s status. As a result, you will sometimes see upsets that place a new champion on top. Even when it only occurred because the defending champ is having an off day. This is not the case in sumo wrestling.

In sumo, winning is only one of many factors that determines your placement. Whether a wrestler is promoted or demoted is not only determined by victories. Since there can be more than one yokozuna, consistency is more important than winning alone. Losses still have potential to impact renown and are not taken lightly. 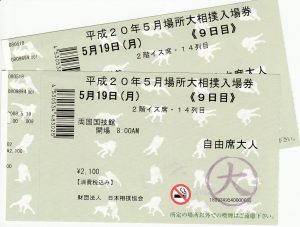 Getting Tickets and Seeing a Match

If you would like to experience a sumo match, you can. You can find the match schedule on the Sumo Association’s official website. There are 5 competitive seasons per year, and they alternate locations. Make sure you check up on which city you will need to be in to catch a match!

You can buy your ticket from Ticket Oosumo. The link on their main site will send you to an online order form for whichever season is closest or ongoing. You will have to stay on your toes to grab one in time, however. Tickets go fast because they only open sales about 40 days in advance of the start of the season.

If you happen to be in Japan and there is not a tournament going on, don’t worry. You can still see the wrestlers in action at their 部屋 (heya), or practice stables. Additionally, this is a free option, unlike tournament seats which run anywhere from ~$30- 350 USD. There are some important things to know before you go though.

You can find most of the tourist friendly stables in Ryogoku. Notable ones for visit are Oshiogawa Beya, Musashigawa Beya, Takasago Beya, and the Arashio Sumo Stable. If you believe you’d like to drop by for a quick visit, Arashio is right for you. It has a window through which passerby can stop and watch before moving on. This way, you can watch for a short time in a way that doesn’t disrupt the training. In other stables, prepare to be there a while longer.

No matter your method of watching, there’s plenty to be gained from seeing the traditional sport in action. Sumo is a unique experience while in Japan, so be sure to check it out while you are there!

For more information on sports in Japan, check out our guide to getting baseball tickets while in Tokyo.